Roadway design can be a highly iterative process with designers having to balance multiple factors – the demands of geographic and financial constraints, compliance with geometric guidelines, management of safety, as well as providing suitable capacity for vehicles. The traffic simulation and analysis capabilities included in the latest update to Autodesk InfraWorks 360 brings us closer to a position where all of these considerations can be addressed in a single intelligent, 3D model, drastically cutting the time required to gain approval from all internal parties on the final design.

The addition of Traffic Simulation for InfraWorks 360 isn’t the only update. On the collaboration side, the ability to share models in read-only mode has been added to provide designers better control over their model data, as well as may other features for Road, Rail and Bridge design.

Traffic Simulation The ability to run traffic simulation models has been available as an Autodesk Labs Preview for the past few months and has now graduated to become an official part of Roadway Design for InfraWorks 360. This addition gives the designer greater confidence in the roadway design that is passed to the traffic engineer for detailed analysis. Designers have full control over which roads are analyzed and have the ability to input traffic flow and mix, specify time of day (e.g. to model rush hour), define turn lanes and set up signalized intersections. It even works on roundabouts! With the ability to analyze and optimize as part of the design process, it is more likely to comply with capacity requirements so that designers won’t be going back and forth with the traffic engineers making numerous minor enhancements to the design.

The highly intuitive graphical interface of the Traffic Simulation module makes it clear when roads have exceeded capacity requirements and make it easy to identify where changes need to be made.

Beyond the additional capabilities related to traffic simulation and analysis, there are several other new features and improvements:

The grouping feature in InfraWorks 360 allows a designer to use a single bridge to carry multiple tracks versus having to create a bridge for each track.

For more details on all the ways that the latest update of InfraWorks 360 can help improve the design of complete civil engineering projects, read Mark Burgess’ blog post on BIM on the Rocks.
You can also find more information here:

Autodesk have now revealed details of Project Expo – This seems like it is built on top of Stingray, to provide real time visualisation, in the cloud! Project Expo was released yesterday via the Autodesk Labs, it is a confidential beta, so although you can use it, you can’t talk about it – a bit like Fight Club!

Project Expo leverages Autodesk’s powerful new game engine, Stingray, and puts it to use for professionals in Architecture, Engineering, and Construction. Our cloud service makes the conversion from BIM to real-time automatic and simple as the click of a button. If you are a Revit user, and this is something you would like to try, you can request to join the project.

We’d love to hear from Architects, who want to fit immersive visualization into their design process, to find out how we can make this technology better. We plan to keep improving it for the duration of the Technology Preview. You can reach us at labs.expo@autodesk.com or in the discussion forums available to participants on the project.

Architectural immersion is alive in the lab.

So, what are you waiting for? Sign up today via Autodesk Labs and try out this new technology preview before your friends and colleagues get a chance. You could also help shape the future of the products with your feedback.

Yesterday saw the release of Autodesk’s Project Falcon add-in for Revit. This is a tool which has been in testing for a while as a stand-alone tool or connected to other software packages such as Inventor, via Autodesk Labs. Project Falcon is a wind tunnel / wind analysis tool which can be used to generate an accurate air flow simulation around your model / building model. Some of the tools you will see in this add-in may look familiar from the energy analysis tools inside of the now graduated Autodesk Vasari.

“Project Falcon is a free* technology preview that simulates air flow around vehicles, buildings, outdoor equipment, consumer products, or other objects of your choosing in a virtual wind tunnel. Falcon technology is extremely geometry tolerant and easy to use, enabling you to begin seeing and understanding air flow behavior within seconds of starting the application. Results update almost in real-time in response to changes in wind-direction and speed that you specify. Visualization tools available within the Falcon family of applications include 2D and 3D flow lines, shaded result planes, vector plots, and surface pressure shading. Quantified outputs include velocity, pressure, drag force, and drag coefficient.”

Another excellent resource has been released via Autodesk Labs which is Project Grapevine, this is basically a new approach to forums and finding help to your Autodesk related problems online. It is a portal where you can ask questions, attach photos, text and even files, to help the community understand and aid you in solving your problem. Seems like a fantastic idea and am looking forward to seeing how it progresses – The more people who use it, the more effective it will be. Could this be the end of Autodesk help forums as we know them?

As you have all probably heard Autodesk’s Project Vasari has finally been released in beta format – “graduating” from Autodesk Labs. It has become a very popular tool with AEC professionals and has been downloaded over 60,000 times in an 18 month period. I have been using Vasari since the initial release for conceptual energy analysis of buildings as well as using the massing tools and formulas for graphical representations. 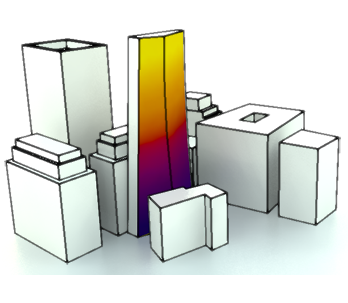 “The main new features of Beta 1 are Revit 2013 file-format compatibility, Cloud Rendering and Repeat/Divide features. A less restrictive End User Licensing Agreement (EULA) is also in place to allow firms to further test this pre-release product in their environments. Access to Autodesk 360 Energy Analysis is still available via a free Autodesk ID login. The Beta 1 release will expire on January 31st 2013.”

I have also been following the Vasari talks since the first one and they have all been informative and very useful when getting to know the software. Vasari is a tool which is fairly simple to use and fast to produce results which look impressive and analysis which could blow the socks off your not so well informed boss. Although at this point, results can only be used for conceptual design and analysis, the software is still an excellent tool to use when considering energy modeling.

Autodesk Labs have released a Plug in of the month section of their website with “Past, Present and future” applications added as created. There are three main sections of plugins: Autodesk inventor, Revit and 3Ds Max. I have tried out all of the Revit plugins and am also interested in the others which I have not had time to get round to testing yet.

The plugins which have been most useful to me have been The Wall Opening Area for Revit This plugin calculates the sum of openings on each wall and stores the values in two shared parameters for each wall. This is a useful tool as it gives you insight into the conditions of openings, as well as materials used and area details. It can come in particularly useful on large projects with multiple wall openings.

The Room/DoorRenumbering for Revit plugin can be used to renumber or re-assign the “Number” properties of rooms and spaces or the “Mark” property of doors and windows in the order that the user selects while avoiding duplicated assignments. The command allows the user to specify the starting number with the option of the prefix and suffix added.

Another plugin which was useful is the File Upgrader for Revit. As you’ve probably noticed when opening files you created in earlier versions of Revit, a short upgrade procedure takes place. This tool is a batch file upgrader which saves time when opening old files. This is particularly useful if you have a large collection of Revit families.

There are also many other useful tools and plugins listed, so if you are interested and actively using Revit or one of the above mentioned software packages, it is well worth checking out this list Autodesk Labs ADN Plugins of the month catalogue. Thanks to Scott Shepard who runs the Alive in the lab blog who posted the original source of the catalogues.

BIMopedia brings you the latest news and reviews from the BIM world. Check out BIM Diary for all upcoming events and webinars. You will find the latest BIM standards and protocols under BIM Documents.